‘Taming the ‘Mickey” Part 1 of The James Kearns Story 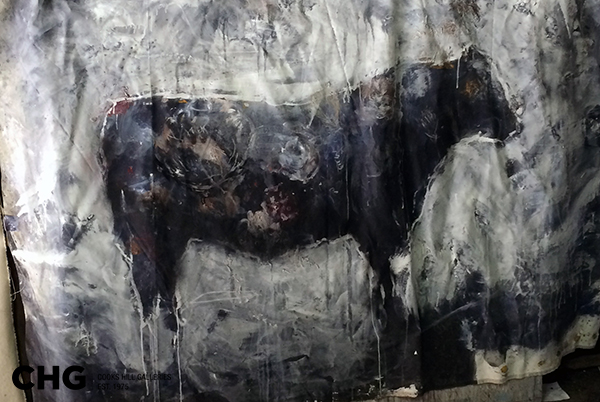 “After a stint in rehab for alcohol, huge growth in maturity and understanding of himself, he decided he was put on this planet to create art.” MW

‘Mickey’ is aussie slang for a wild, unbranded , and untamed bull, one whose spirit runs in conflict with the intention of its handlers. Likened to this is the life of artist, James Kearns.

Due to a complicated and challenging up bringing James has had destructive encounters with authority, taken shelter in excess, sought out destruction, and refused to be tamed. Up until recently.

A common scenario for many troubled young men in modern society.

The loss of his love, impending arrival of his daughter and his blossoming career as a professional artist have resulted in reflection and the realisation that his approach to life wasn’t working. With the promise of greatness and the opportunity to achieve his potential imminent I had the good fortune of recently getting to know ‘Kearnsy’.

This is his story. Set out in 3 parts.

For many urbanites the qualities of country life are not acknowledged, let alone considered or understood. This is the story of a young man and a dedicated artist/painter which has all the twists of an action packed novel. In fact when you commence reading about James Kearns’s life you will become so engrossed you will want to know more.

Join us at the Cooks Hill Galleries on February 14 between 6-8pm for the opening evening of this talented emerged artist’s first solo exhibition in Newcastle. RSVP and more details here.

The loveable, laconic, soft natured veneer of Kearns is misleading. This is augmented with a competitive spirit from an early age, surfacing at kindergarten. James couldn’t compete with another student who was the son of a graphic artist. He remembers his ‘astronaut’ painting was second to the other boys.

A thorough commitment to his trade is soon revealed, however this often is interrupted by a wild side, his mother’s early death, alcoholism, volatile relationships. Guidance is something Kearns has not had the pleasure of in his lifetime. Often confused with school friends and a boyhood camaraderie all become confused with real world repercussions and reality when it comes to people.

During high school, a live-in boarder since age 13, James developed his art skills and graduated from high school top of the art class. James never saw himself or even wanted to be an artist, he just felt a compulsion to paint and an overpowering euphoria when he did. These intense and foreign feelings were uncomfortable for him as he had always tried to be “normal”. In fact these feelings scared James and he decided to take on a more ‘safe career’. On graduating from school he studied graphic design and worked for leading design and advertising firms for 7 years.

After a stint in rehab for alcohol, and a huge growth in maturity and understanding of himself, he decided he was put on this planet to create art. Many had little faith and there was no support, especially from family but this didn’t deter James’s self confidence and he decided he would paint even if it meant he would live in poverty. Making his mark of his experience of his life through painting was more important than having a happy family with a white picket fence. This was a hard decision as James has always had a dream of becoming a loved family man.

Another great interest was his sporting prowess in Rugby Union.

The acceptance into the tough competitive football culture was sacred for James. It was something he knew, being a recognised player with outstanding skills, and this fact being acknowledged by his peers and seniors was important. However there remained the yearning, a ying yang pull; i.e. football offered a masculine balance to his creative pursuits!

Along with sport came the mateship and all that comes with it, namely a strong drinking culture. These mannerism soon became part of James’ nature..

← Art gallery commission on art sales – What do artists get for their money?
“My association with Kearnsy, the booze and Australia’s most famous artist…” Part 2 of The James Kearns Story →